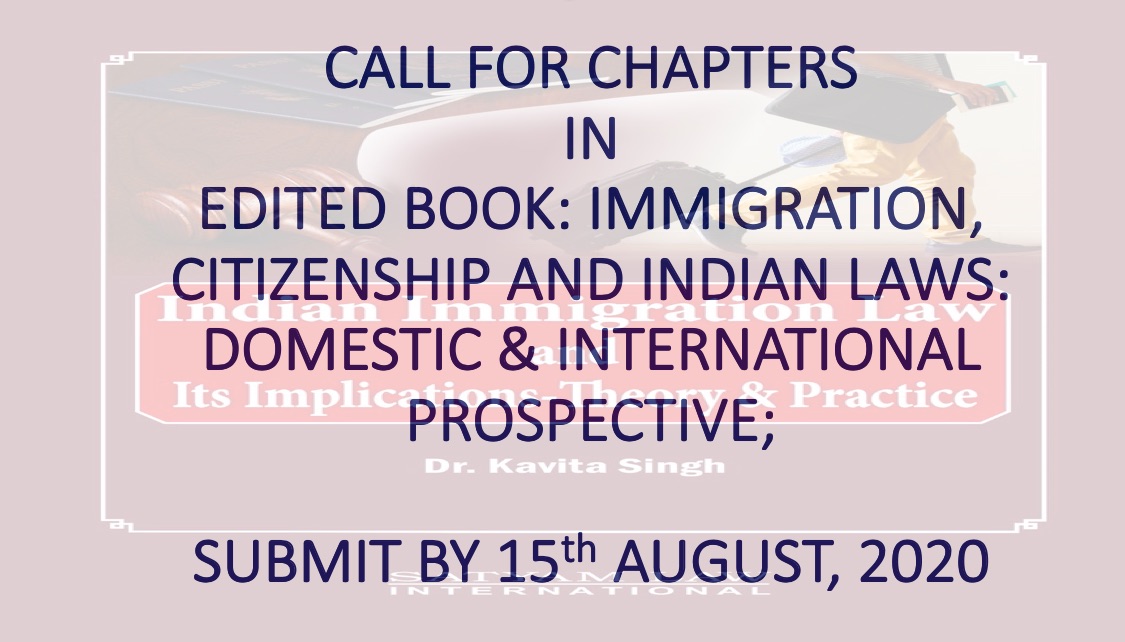 About Call for Chapters:

Second Edition of Call for Edited Book will provide  detailed discussion on the Immigration, Citizenship and Indian Laws: Domestic & International Prospective. Renowned scholars would be joining the Call for Papers that aims to garner a strong academic response addressing the recent and imminent changes in the legal framework in conjunction with artificial intelligence and allied areas.

Immigration, Citizenship and Indian Laws: Domestic & International Prospective: The Indian Constitution was adopted the “We people of India” as declared by the Constitution of India. The Indian Constitution does not grant Supremacy of any community, sect or religion. It means it treat   with equality to all inhabitant (citizen) of India as per the constitutional mandate. The Indian citizenship drives its power from the constitution through the Indian citizenship Act 1954.  Under the Citizenship Act there is provision of National Citizenship register of India (NRC) under Section 14 A (2,3 and 4) and National Population Register (NPR) according to Citizenship (Registration of Citizens and issue of National Identity Cards) Rules, 2003. The Government of India conducted NRC process in Assam,where many discrepancies come out and outcome of the NRC process has not been accepted either State Government or the Centre government.

The Central Government brings the Citizen Amendment Act 2019 and propose to conduct NRC and NPR National wide which was also announced in parliament. However, current Amendment, NRC and NPR has been widely discussed among political and social sphere in society.

The aim of the proposed book is come out with clear understanding of Nationality law and implications of current legal changes on common citizen or illegal immigrant.  Further, what are legal and constitutional remedies for people affected by the NRC process and determination by the officials?

LawOF is the emerging portal for Law Students & Teachers.